In boxing, a cross (also commonly called a "straight")[1] is a power-punch like the uppercut and hook. Compubox, a computerized punch scoring system, counts the cross as a power-punch.

It is a punch usually thrown with the dominant hand the instant an opponent leads with his opposite hand. The blow crosses over the leading arm, hence its name.

From the guard position, the rear hand is thrown from the chin, crossing the body and travelling towards the target in a straight line. The rear shoulder is thrust forward and finishes just touching the outside of the chin. At the same time, the lead hand is retracted and tucked against the face to protect the inside of the chin. For additional power, the torso and hips are rotated anti-clockwise (for right-handers) as the cross is thrown. Weight is also transferred from the rear foot to the lead foot, resulting in the rear heel turning outwards as it acts as a fulcrum for the transfer of weight. Body rotation and the sudden weight transfer is what gives the cross its power. Like the jab, a half-step forward may be added. After the cross is thrown, the hand is retracted quickly and the guard position resumed. It can be used to counterpunch a jab, aiming for the opponent's head (or a counter to a cross aimed at the body) or to set up a hook. The cross can also follow a jab, creating the classic "one-two combo". The cross is also called a "straight" or "right". 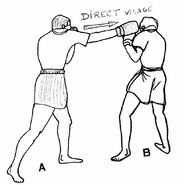 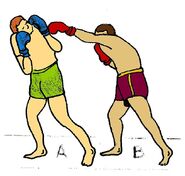 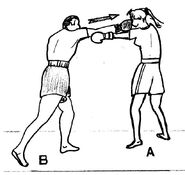 Retrieved from "https://boxing.fandom.com/wiki/Cross?oldid=12116"
Community content is available under CC-BY-SA unless otherwise noted.