sought to boxing as an outlet to vent his frustration and anger. He soon developed the skills required to become a pro boxer. His precision, speed and uncanny ring sense made him the best at his age. He attended Ottawa Hills High School before dropping out to pursue boxing for a living.

Floyd Mayweather Jr’s amateur career in boxing was a roll. He won the the national Golden Gloves championships in 1993, 1994 and 1996. Mayweather’s amateur career record stood at 84-8. In 1996, Mayweather participated in the Atlanta Olympics and won a bronze medal in the featherweight division. Same year, he fought his first professional bout against Roberto Apodaca which he comfortably won.

His winning streak continued until early 1998 as he won most of his fights either by knockout. Mayweather’s brilliance in the ring made him highly popular within the sporting world. After his 14th professional fight, Mayweather’s father took over as his trainer, after being released from prison. Under his father’s training, Mayweather’s sporting skills enhanced considerably. He was touted by sporting legends as a pugilistic prodigy who would be an unbeatable and an indomitable force in boxing.

It took Mayweather just two years of professional boxing to win his first world title, the WBC Super Featherweight (130 lb) Championship against the then World No 1 Super Featherweight Genaro Hernandez, in 1998. His victory made him the lineal champion of the division. Also, he became the first 1996 U.S. Olympian to win a world title. In 1999, he successfully defended his title thrice; against Carlos Rico, Justin Juuko and Carlos Gerena. 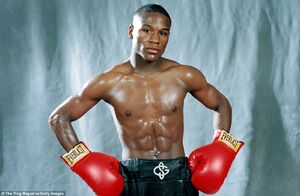 In early 2000, Mayweather successfully defended his title for the fifth time, when he defeated Gregorio Vargas. At the same time, he fired his father as his manager and instead appointed James Prince. Later on, Roger Mayweather returned to his role as a trainer for Mayweather’s fight against Emanuel Burton.

He fought his most memorable fight against hard-hitting, former IBF super-featherweight champion Diego Corrales. Both the fighters were undefeated champions until then. Though technically Corrales was superior to Mayweather in all aspects, the latter’s finesse in the ring and superb speed helped him successfully defeat Corrales in every round knocking him off five times in a row, thus claiming boxing's mythical pound-for-pound title. Mayweather suffered the first knockdown of his career in a fight against Carlos Hernandez on May 26, 2001 in round six. Mayweather eventually won the fight in the 12th round. Mayweather’s last fight in the super featherweight division was against Jesus Chavez. While Chavez came into the fight with a 31-bout winning streak, Mayweather was defending his WBC super featherweight title for the eighth time. He successfully defeated Chavez thus ending the latter’s winning streak and defending his own title.

Mayweather’s first lightweight fight was against WBC champion Jose Luis Castillo. Despite being his debut, Mayweather shocked and surprised the WBC champion knocking him off in a 12-round game. It was due to the closeness of their first bout that Mayweather accepted a rematch which he yet again won by a marginal gap.

In April 2003, Mayweather successfully defended his WBC lightweight title in a unanimous decision over Dominican Victoriano Sosa in a 12-round bout. He then fought against WBC #1-ranked contender Phillip N'dou. Defeating the latter, he retained his ranking and was The Ring's lightweight champion and the #5-ranked best pound-for-pound boxer in the world. In 2004, Mayweather made his 140-pound debut in light welterweight by defeating former titlist DeMarcus ‘Chop Chop’ Corley.

In 2005, he fought against Henry Bruseles in another WBC elimination bout, outclassing Bruseles throughout the first seven rounds. His victory made him the mandatory challenger for Gatti's WBC light welterweight championship.

Mayweather bagged his third world title defeating Arturo Gatti in the ring on June 25, 2005 in Atlantic City. The fight was a highly publicized one with strong supporters hooting for Gatti. However, blowing the expectations of Gatti’s fans, Mayweather dominated the fight all over. Gatti was no match to Mayweather’s high speed and quick punches.

Mayweather became the first fighter since Roberto Durán to have captured The Ring titles in both the lightweight and welterweight divisions. He also captured his third lineal championship in super featherweight, lightweight and welterweight. Mayweather next competed against light middleweight titleholder Oscar De la Hoya. Mayweather won the fight by a split decision in 12 rounds, capturing the WBC title. Following the fight, Mayweather retired from boxing.

He came back in the Ring not long after for a fight against light welterweight champion Ricky Hatton. The fight that took place on December 8, 2007 was the biggest welterweight showdown between two undefeated fighters. Controlling the fight right from the start, he knocked down Hatton to retain the welterweight championship title. Finally, Mayweather announced his retirement from boxing.

Mayweather came out of his retirement 21 months later to fight Juan Manuel Marquez. The match was a lopsided affair, with Mayweather winning it convincingly. Subsequently he fought against Shane Mosley, Manny Pacquiao and Victor Ortiz; each of the matches became the biggest non-heavyweight pay-per-view events in the sport’s history. Mayweather returned to light middleweight championship against Miguel Cotto winning the match comfortably. He then defended his title at welterweight in a match against Robert Guerrero.

Rumors of Mayweather’s return started doing the rounds in 2016. He faced MMA star Conor McGregor on August 26, 2017 at the T-Mobile Arena in Las Vegas, Nevada and was declared the winner.

Community content is available under CC-BY-SA unless otherwise noted.
Advertisement