Floyd Patterson was born on January 4, 1935, in Waco, North Carolina, the third of Thomas and Annabelle Patterson's 11 children. Growing up poor in Waco and later in Brooklyn, he was an antisocial child who hated school. Unable to read or write by age 11, Patterson was sent to the Wiltwyck School for Boys in upstate New York, where he finally made progress in the classroom and learned how to box. After returning home,

Patterson started working out with legendary boxing trainer Cus D'Amato at the Gramercy Gym in Manhattan. He began boxing as an amateur in 1950, and won New York Golden Gloves titles in 1951 and 1952. At the 1952 Summer Olympic Games in Helenski, Finland, Patterson notched five knockouts in as many bouts to win the middleweight gold medal.

Patterson turned professional after the Olympics, winning his first paid bout by knockout in September 1952. Fighting as a light heavyweight, he lost only once over the next four years.

With the heavyweight title up for grabs following the retirement of Rocky Marciano, Patterson scored a fifth-round knockout of Archie Moore in November 1956 to become the youngest heavyweight champion in history. He successfully defended his title four times, overcoming his natural reticent nature and size disadvantage with speed and an unusual "peek-a-boo" style that flummoxed opponents. 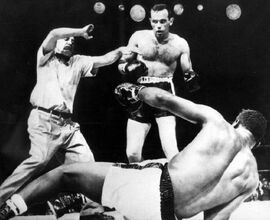 In June 1959, Patterson suffered a crushing defeat at the hands of Sweden's Ingemar Johansson, who floored the champ seven times before the fight was stopped in the third round. But Patterson won the June 1960 rematch with a convincing fifth-round knockout, becoming the first heavyweight to regain the championship, and he stopped Johansson again in their grudge match the following March.

Patterson lost the heavyweight championship for the second time when Sonny Liston knocked him out in the first round in September 1962. Although they squared off again in July 1963, there was no redemption for Patterson, who lost via first-round knockout again.

He earned another shot at the title with a bout against Muhammad Ali in November 1965. Although the pre-fight hype played up the bad blood between them, with Ali calling Patterson an "Uncle Tom," the two boxers shared a mutual respect. Recognizing that Patterson had been slowed by a back injury, Ali withheld from unleashing the full fury of his blows until finally delivering a 12th-round knockout.

Patterson remained a quality fighter well into his 30s, missing out on chances to regain the championship with losses to Jerry Quarry and Jimmy Ellis. Facing Ali once again in September 1972, he fought gamely for six rounds before the match was stopped in the seventh due to a swelling cut near his eye. It was the last fight of Patterson's professional career, although he never formally retired, and he finished with an impressive record of 55-8-1, including 40 knockouts.

From 1977 to 1984, Patterson was a member of the New York State Athletic Commission, which supervised boxing in the state. He was honored for his accomplishments with his induction into the United States Olympic Committee Hall of Fame in 1987 and the International Boxing Hall of Fame in 1991.

Patterson was named chairman of the New York State Athletic Commission in 1995, but the onset of Alzheimer's disease hindered his work, and he retired in 1998. Boxing's quiet champion died from the effects of Alzheimer's and prostate cancer on May 11, 2006, in New Paltz, New York.

Retrieved from "https://boxing.fandom.com/wiki/Floyd_Patterson?oldid=11587"
Community content is available under CC-BY-SA unless otherwise noted.