Joe Frazier (1944-2011) was a professional boxer from the United States whose career lasted from 1965 until 1976. He was undisputed heavyweight champion of the world in the early 1970’s. Frazier was considered to have the most dangerous left hook in boxing and is best known for his three fights against Muhammad Ali. Before turning pro, Frazier had been an Olympic champion at the 1964 Games in Tokyo. After a comeback for a single fight in 1981, he retired from boxing and was later inducted into the International Boxing Hall of Fame.

One of 13 children, Frazier was born on January 17th, 1944 in Beaufort, South Carolina. He grew up on the family’s farm. His school days were hard, as he did not find academic learning came naturally to him and he had to work on the farm most evenings. However, his family was among the first in their neighborhood to purchase a television. As a result, Frazier gradually grew interested in the boxing programs that were often shown. By his teens, he was practicing on a home-made punching bag and telling anyone who would listen that he would one day emulate his boxing hero, Joe Louis, and become a world champion boxer.

Frazier left the South at age 15 after an altercation on the family farm. He traveled to New York, where his brother Tommy lived, and by the early 1960’s he was established as one of the nation’s best amateur boxers. He won the prestigious Golden Gloves championships every year between 1962 and 1964, and won gold on a 3-2 split decision at the Tokyo Olympics – despite having to fight with a broken thumb. A year after the Games, Frazier turned professional, and quickly demonstrated that his potential was just as high in the pro game as it had been in the amateur ranks. 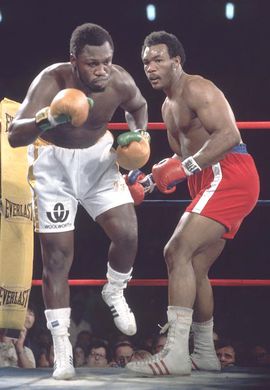 During the late 1960’s, Frazier repeatedly beat high-ranking opponents including Buster Mathis, Jerry Quarry, and George Chuvalo. In 1970 he became undisputed heavyweight champion when he defeated Jimmy Ellis by way of technical knockout at Madison Square Garden. Thanks to Muhammad Ali’s first retirement, the belts Ali had held had become vacant, thus making this a unification bout. Ali quickly returned to the ring and the two men met for the first time in 1971, again at Madison Square Garden. The match had been built up as the “Fight of the Century,” and it lived up to the hype: Frazier won in 15 brutal rounds, becoming the first man to defeat Ali as a professional.

Frazier held his title for two years, but was then knocked out by George Foreman. Frazier elected to continue boxing, and met Ali for the second time, this time losing. In 1975, the two men met for the final time, the fight taking place in the Philippines. The so-called “Thrilla in Manila” turned out to be one of the century’s greatest boxing matches, with Ali winning a sensational contest by way of 14th-round TKO. Frazier retired the following year, after losing to Joe Bugner, returning only for a single fight in 1981. He then became a trainer and occasional actor, before dying of liver cancer in November, 2011.

Retrieved from "https://boxing.fandom.com/wiki/Joe_Frazier?oldid=11724"
Community content is available under CC-BY-SA unless otherwise noted.